Let Us Rise Above The Rest

H2STC DIEMS Innovators Hackathon is here for technology enthusiast by H2S and Deogiri Institute Of Engineering And Management Studies. Here we are to celebrate Hactoberfest. Hacktoberfest can be an especially welcoming time to dip your toes into open source contributions for the first time. Hacktoberfest can be great for finishing off a project, or starting something fresh. Maintainers are the keystone of open source. This year’s Hacktoberfest has a new, added focus: empowering open source maintainers. Participate in OpenSource projects and make contributions for a great experience, a chance to win cool swags, and other benefits. Start your OpenSource Journey. Get chance to explore Git-Github with Hactoberfest 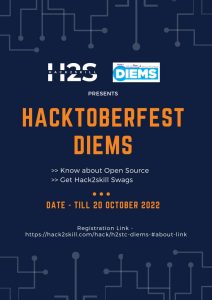 Uday Sharad Joshi’s professional career, research, and programmatic pursuits are heavily based on the intersection between art practices, social justice, community development, and youth leadership. Most recently, he was the Director of Engagement and Innovation at the largest community music school in the United States, designing music and non-violence programs. Previously, Uday produced national youth arts, media, and civic action programs with the Kennedy Center of the Performing Arts in Washington DC. Prior, he launched a social impact performance curriculum in the Global Village Zone of the Newark, New Jersey Public Schools as a strategic approach to address education achievement gaps in some of the lowest-performing schools in the United States. From 2004-2007, Uday was a senior staff member at the Oakland School for the Arts and a Commissioner of Cultural Affairs for the City of Oakland, CA. In addition to co-producing the Oakland Youth Arts Festival: Arts Save Lives, Uday also started a youth mentorship in the arts program in East Oakland, CA and served as a model arts education program consultant for the Alameda County Office of Education. Uday is a Kennedy Center Arts Management Institute Fellow, an Americans for the Arts Emerging Leaders Scholar, and holds a Master’s Degree and Bachelor’s Degree from Harvard University and Cornell University respectively.